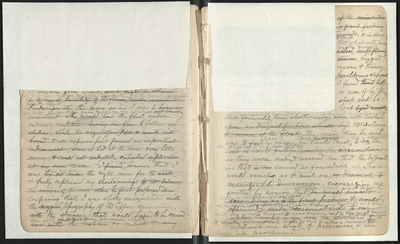 observation from which [much might be obtained in the way of knowledge of the flora, rocks, animals, landscapes etc., the more so as] of 8 or ten miles to learn something of the plants animals, rocks, etc. for I was to be left perfectly free to follow my studies [and liked] [have an assistant who would tend the flock under ordinary conditions, leaving me free to follow my studies, while the wages offered, $40. a month with board & all expenses paid formed an important inducement, since I had at the time very little money, & could not undertake extended explorations at my own cost.] I judged [feared] however that I was in no way [by no means] the right man for the place, [work] & freely explained my shortcomings [to Mr Delaney the owner of the sheep when he first proposed it,] confessing that I was wholly unacquainted with the [rugged] topography of the upper mountains, [with] the streams that would have to be crossed, The wild sheep-eating animals, etc. [nor with the location or extent of any]

I feared [that] half of more of his flock [sheep] would be lost [beyond recovery.]

[But] fortunately, as it turned out these shortcoming seemed insignificant [were not looked upon as disqualifications at all by] to Mr Delaney [the owner of the flock.] The main thing he said was to have [find] a man he could trust about the camp to see that [do] the shepherd did his duty [best he could faithfully under the circumstances as they were met,] & assured me that the difficulties that [to me] seemed so formidable at a distance would vanish as [I] we went on [or diminish to manageable dimensions,] encouraging me further by saying that [erasures- sketch the scenery] the shepherd would do all the herding himself while I could [at first] gather plants [take pictures] and study the rocks and scenery as much as I liked that he would himself would accompany us to the first camp and make occasional visits to our higher ones to replenish our stock of provisions and see how we prospered. [accompany us to the first pastures & would afterwards make occasional visits to our upper camps to see how we prospered & to]