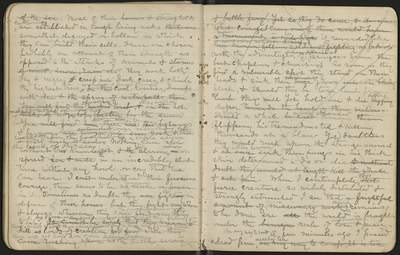 of the sea.] Most of their [homes & strongholds] colonies are established in [tough] living oaks [that are] somewhat decayed or hollow [erasure no living] in which they can conveniently build their cells. These are chosen probably on account of their strength as opposed to the attacks of animals & storms [of wind, snow, rain etc]. They work both day & night [&] creep into dark caves & climb the highest trees, wander and hunt through [In the] cool ravines [damp with dew & the spray of waterfalls there you will find this [aggressive]wicked Arab, &] as well as on [the] hot unshaded ridges extending their [rocks of ridge tops beaten by the sun you will find him there too. His] highways & byways [extended] over everything but water and sky the foothills to a mile above the level of the sea.[are worn into every rock & tree & every inch of soil.] Nothing can stir without their knowledge [his knowing it], & [the][an] alarm [notice] are [is] spread [far & wide] in an incredibly short time without any howl or cry that we can hear. I can't understand their ferocious courage, there seems to be no common sense [or prudence] in it. Sometimes no doubt they [are] fight[ing] in defense of their homes, but they fight anywhere & always wherever they can find anything to bite. As soon as [they find] a vulnerable spot is discovered on man or beast, they stand on their head and sink their jaws and should they be torn limb from limb they will yet hold on and die biting deeper. [It cannot be surely that they mean to kill us lords of creation for food when they come rushing upon us in battle array]

[& battle fury. Yet so they do come, & Heavens & with what courage! Every one of them would have a [high] monument a mile high if rewarded like [our own soldier heroes] their human fellow soldiers fighting as patriots with the advantages [& have [ ] &] of prayers from the best chaplains & churches. As soon as they find a vulnerable spot they stand on their heads & sink their [comparatively][huge] jaws [into the bleeding flesh,] & should they be torn limb from limb they will yet hold on & die digging deeper [towards the heart of their victims.

Should] Were a whale suddenly stranded [be cast] among them flapping his tremendous tail & killing thousands at a blow yet doubtless they would rush upon the strange animal & with ruthless heroism [at once] sink their fangs in his thick skin determined to do or die [& without doubt they would at length kill the whale & eat him]]. When I contemplate this [that] fierce creature so widely distributed & strongly entrenched, I see that [a frightful amount of missionary work] much remains to be done ere [all] the world is brought under the [benign] rule of [love &] universal peace.