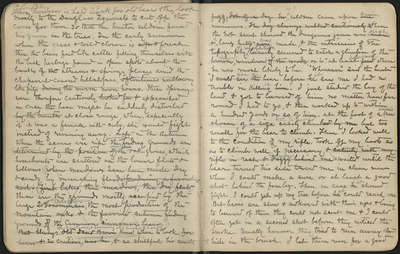 [Climbing] [This] however is hard work for old bears & they look mostly to the Douglass Squirrels to cut off the cones for them, so that the hunter seldom found his game in the trees. In the early summer when the grass & wild clover is [soft &] fresh then the bears feed like cattle filling themselves with the lush herbage found in open spots about the banks of the streams & springy places amid the chaparral-covered hillslopes, [oftentimes wallowing like pigs during the warm noon hours]. These openings were therefore cautiously [looked for &] approached in case the bear might be suddenly disturbed [by the hunter] at close range, when especially if it was a female with cubs, [she] it would fight instead of running away. Late in the autumn when the acorns are ripe the favorite feeding grounds are [determined by the position of the] [are in] oak groves, which hereabout are scattered on the lower flats & hollows (([where meadows have been made dry & sandy by in-washing floods producing a favorable soil. First lakes, then meadows, then dry flats these are the grounds mostly occupied by the large Quercus Californicus [sonomensis], the most productive of the mountain oaks & the favorite autumn feeding grounds of the common cinnamon bear.]))

[But] Always the cautious and cunning old hunter Sandy, [Old David Brown] knew where to look [for bears & so cautious was he, & so skillful his small]

[fuzz[y] dot of a dog he] & seldom came upon Bruin [one] unawares. [The dog always walked cautiously] When the hot scent showed the dangerous game was nigh [near] [&] a long halt[s] was [were] made, & the intricacies of the topography and vegetation leisurely scanned to catch a glimpse of the [brown] shaggy wanderer [of the woods] or to at least determine [find] where he was most likely to be. "Whenever" said the hunter "I saw a [could see the] bear before [he] it saw me I had no trouble in killing it [him]. I just studied the lay of the land & got to leeward of him, no matter how far round I had to go, & then worked up to within a hundred yards or so of him, at the foot of a small tree [chosen of a size] that I could easily climb[ed by me] but too small for the bear to climb. Then I looked well to the condition of my rifle, took off my boots so as to climb well if necessary, & [calmly with my rifle in reach & doggy [Sandy] behind me] waited until the bear turned his side toward me in clear view when I could make a sure or at least a good shot behind the foreleg. Then in case he showed fight I could get up my tree before he could reach me But bears are slow & awkward with their eyes & being to leeward of them they could not scent me & I could often get in a second shot before they noticed the smoke. Usually however they tried to run away [to] and hide in the brush. I let them run for a good