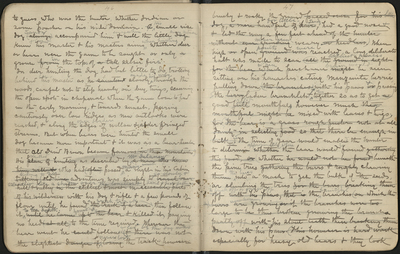 to guess who was the hunter, whether Indian or some poacher on his wide domain. [A] His small wise dog Sandy [always] accompanied him every where & well the little hairy mtman [mountain man] [dog] knew and loved his master & his masters aims when hunting, whether deer or bear were the game to be sought or only [a] grouse in [from] the top of [a tall] silver firs.

In deer hunting the dog had but little to do, trotting behind his master as he [sauntered] slowly trotted his way through the woods, careful not to step heavily on dry twigs, scanning the open spots in chaparral where the game love to feed in the early morning & towards sunset, peering cautiously over low ridges as new outlooks were reached, & along the open borders [edges] of willow & alder fringed streams. But when bears were hunted the small dog became more important & it was as a bear-hunter that Old David Brown became famous [in these mountains].

His method [plan of hunting] as described by Mr. Delaney [a man [friend] who knew him well &] who had [often] passed many a night in his cabin listening to his [talking (old time] adventures, was simply to go slowly and [travel over] silently like a shadow over the loneliest dens and bear pastures [hill & valley in the stillest & most inaccessible parts] [of his wilderness] with his dog & rifle & a few pounds of flour until he found a fresh track [the track of a bear], then follow it to the death [until he came up] [found it] [to the bear & killed it] paying no heed [at all] to the time required. Wherever the bear went he [could] follow and led by the dogs who [& there was not the slightest danger of losing] never lost the track however

brushy & rocky the ground [passed over for his little] [dog, a mere handful of hair] for little Sandy had a good nose & [& led the way a few feet ahead of the hunter without ever growing] never grew weary [or heedless]. When high [or] open points were [ground was] reached a long deliberate halt was made to scan [all] the likeliest places [ground in sight for the bear which] when perchance bruin would [might] be seen sitting on his haunches eating Manzanita berries, pulling down [the branches] the berry laden branchlets with his paws and [or] pressing them together so as to get a good solid [full] mouthful however much [the[y]] [mouthful might be] mixed with leaves & twigs for the bear is a gross rough feeder not at all dainty in selecting food so that there be enough in bulk.] The time of year [would] enabled the hunter to determine approximately where [whether] the bear would be found [gathering this food or] [( whether he would not be found beneath the pine trees gathering the burrs & roughly] chewing [them] the burrs into a mash to get the bulk of the seeds or climbing the trees [for the burrs breaking them] to break off or gnaw off [off with his paws, that is] the fruitful branches [on which the burrs [were hanging] are growing, or if the branches were too large to be thus broken gnawing the branches partly off with his stout teeth then breaking them down with his paws. This however is hard work especially for heavy old bears & they look]