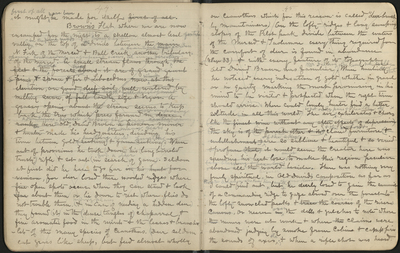 Brown's Flat where we are now encamped for the night is a shallow almost level fertile valley in the pine woods [erasure …..pines and Incense Cedar] on the top of the [a] divide between the [main] N. [North] Fork of the Merced & Bull Creek, a beautiful [high] garden opening commanding magnificent views in every direction. [another tributary of the Merced. A small stream flows through the flat & the [noble] forests [trees] about it are of grand giant pines & spruce & fir & Libocedrus now at this elevation, on good deep soil, well watered by melting snow, seem to [have] reach full development] of full lordly size & vigor. A grassy opening about the stream seems to keep back the trees which press forward [most imposingly adventurous pioneer bossy flowering centre opening] in dense ranks.] Here the Old David Brown [a pioneer miner & hunter] made his headquarters, for many years dividing his time between gold hunting and bear hunting [seeking & game seeking]. [When out of provisions he took down his long barreled trusty rifle & set out in search of game. Seldom at first did he have to go far in his hunt for venison, for deer loved these wooded ridges where fine open spots occur where they can stand & look far about them or lie down to rest where flies do not trouble them. Hiding places & in case of needing a hidden den) they found (it) in the (dense tangles of) chaparral, & fine aromatic food in the mints & the leaves & branchlets of the many species of Ceanothus. Deer seldom eat grass like sheep, but feed almost wholly]

[on Ceanothus which for this reason is called deer-brush by mountaineers.) On the lofty ridges & long sweeping slopes of the Pilot peak divide between the waters of the Merced & Tuolumne everything required for the comfort of deer is found in abundance (v. Page 33) & with every feature of its topography old David Brown was familiar. Mr. Delaney who knew him well, said that when hunting he noticed every indication of gold whether in gravel or in quartz marking the most promising in his mind to be visited & prospected when the right time should arrive. Where could lonely hunter find a better solitude (in all this world.) The air is not only pure and healthy, it cheers and exhilarates [(like the finest wine without any after effects of depression The sky is of the purest ether & its)] and the colors and cloud furniture [(& embellishments)[of the sky]are so sublime & beautiful & so varied & profuse (that) it would seem the Creator here was spending his best love [on it] to make this region peculiar ([a blessing and beauty] above all the world beside.] There was nothing very finely spiritual in old David's composition as far as I could find out that Mr. Delaney who knew him well but [it was known that] he dearly loved to gain the summit of a commanding ridge to gaze abroad over the forest to the [lofty] snowclad peaks & [trace the] sources [courses] of the rivers [canons], or nearer over [in] the dells & gulches to note where [the] miners were at work & when [the] claims were abandoned judging by smoke from cabins & campfires the sounds of axes, etc. & when a rifle shot was heard.