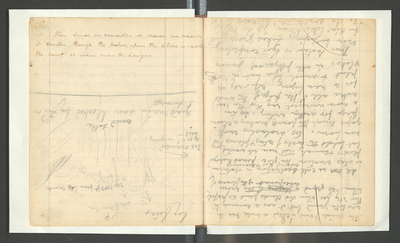 Head main can [canyon] blocked by 2? Or 5 domes

All [that] we call destructive in nature is also creation. Endings also beginnings. The glac [glacial] period destroyed plants & animals that were not wanted but behold the hosts of mtns [mountains] & [plans/plains] that were born. As avalanches sweep gaps through the forests making a clean page for another writing, So in a more universal way did the ice [wake] all ? the page of the world for a new [beginning] [not] only in plant & animal life but in rocks & lakes in all physical forms.

Thus nature is ever completing ever beginning, Lakes grow old & die like men, so do mtns [mountains] so do continents by water by ice.