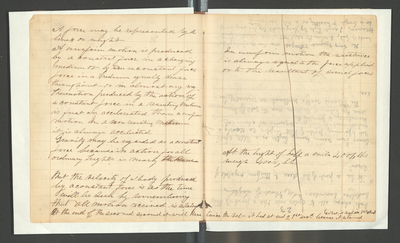 A force may be represented by a line or weight.

Gravity may be regarded as a constant force because its action for all ordinary hights [heights] is nearly the [same].

That the velocity of a body produced by a constant force is as the time will be seen by remembering that all motion received is retained. At the end of the [seconed] [seconed] it will have twice the vel [velocity]- it had at end of 1st secd [second] because it retained (what it [re’cd] [in] 1st [secd].

In uniform motion the resistance is always equal to the force applied or to the resultant of several forces.

[Out] above all to enter into the a part of this bodiless beamless [holy] ghost of light. To be a part of the dew & the fine crystals of snow

Every true [rainy] [morning] light as a [little] child yet [farming] part of that light so clearly a embodiment of light requires no chemical knowledge to [preserve/perceive] [this].

Now the silver of the moon now the gold of sun. The blessed rocks without a memory of ice.

The [savy/song] squirrel & ouzel are two most delightful [works] of God, & when the child that [doesn’t/closest] understand them, I don’t think sq [squirrel] long winded try his long laugh. He is bright & healthy as a mtn [mountain] sunbeam ray