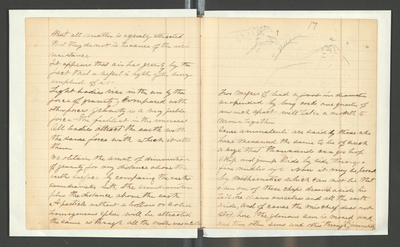 that all matter is equally attracted that they do not is because of the airs resistance.

It appears that air has gravity by the fact that a vefsel [vessel] is lighter after being emptied of it.

Light bodies rise in the air by the force of gravity compared with other forces gravity is a very feeble force-the feeblest in the universe. All bodies attract the earth with the [same] force with which it attr [attracts] them.

Two mafses [masses] of lead a foot in diameter suspended by long cords one quarter of an inch apart will take a month to move together.

[Sense] [animalcule] are said by those who have measured the same to be of such a size that thousands can go hop skip and jump side by side [through] a fine needles eye. Now it may be proved by mathematics which can not be that when on [one] of these chaps draws aside his tail, he draws ourselves and all the earth aside, and of [course] the mischief does not stop here the glorious sun is moved and and then other suns and others through all immensity