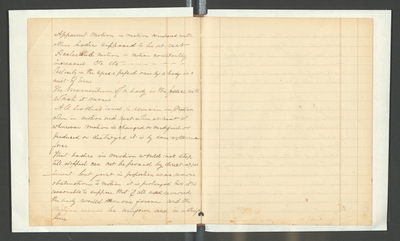 Apparent motion is motion compared with other bodies supposed to be at rest. Accelerated motion in motion constantly increased etc. etc…

Velocity is the space passed over by a body in a unit of time.

The momentum of a body is the force with which it moves. All bodies tend to remain in motion when in motion and rest when at rest wherever motion is changed or modified or produced or destroyed it is by some [extraneous] force.

That bodies in motion would not stop till stopped can not be proved by direct experiment but just in proportion as we remove obstructions to motion it is prolonged so it is reasonable to supposed that if all removed the body would move forever and the motion would be uniform and in a straight line.