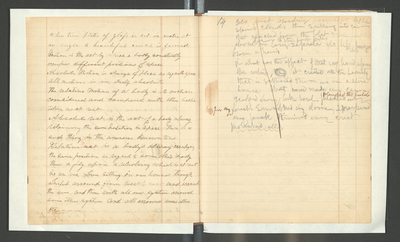 When two plates of glafs [glass] is set in water at an angle a beautiful curve is formed. Motion is the act by which a body constantly occupies different portions of space. Absolute motion is change of place as [regards] space all motion is in itself absolute.

The relative motion of a body is its motion considered and compared with other bodies taken as at rest.

Absolute rest is the act of a body alway retaining the same position in space. There is no such thing in the universe known to us. Relative rest is a body’s alway occupying the same position in regard to some other body. Thus a fly upon a revolving wheel is at rest so are we when [sitting] in our houses. Though whirled around from west to east and around the sun and then with all our system around some other system and all around some other etc…

& what was the effect of that very hand upon the mtns [mountains], it created all the beauty that is gathered [there] as in a store house, that hand made every canon. Scooped [every] lake bowl ploughed the fields planted every for every forest. Smoothed every dome sharpened every peak [trimmed] every crest [polished] all