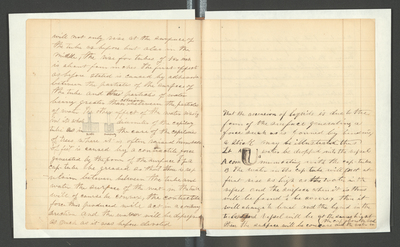 will not only rise at the surface of the tube as before but also in the middle, the rise for tubes of [ ] inch is about four inches. The first effect as before stated is caused by adhesion between the particles of the surface of the tube and the particles of water being greater than cohesion between the particles of water. The other effect of the water rising in its whole diameter of the capilary tube as in [sketch: water; mercury] the case of the capilaries of trees where it is often raised hundreds of feet is caused by a contractile force generated by the [form] of the surface. If a cap [capillary] -tube be greased so that there is repulsion between between the tube and water the surface of the wat-[water] in the [tube] will of course be convex, the contractile force this produced will act in a [contrary] direction and the water will be deprefsed [depressed] as much as it was before elevated.