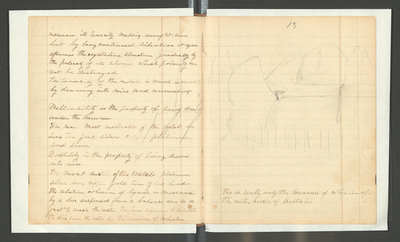 increases its tenacity making wrought iron but by long continued vibration it again afsumes [assumes] the crystalline structure gradually by the polarity of its atoms which polarity can not by destroyed.

The tenacity of the metals is much increased by drawing into wire and annealing.

Malleability is the property of being drawn under the hammer.

The most most malleable of the metals are lead tin zinc silver copper platinum and iron.

Ductility is the property of being drawn into wire.

The most ductile of the metals platinum silver iron copper gold tin zinc lead. The relative cohesion of liquids is measured by a [disc] suspended from a balance arm so as just to reach the water. The force required to separate the [disc] from the water is the measure of cohesion.

This is really only the measure of cohesion of the outer circle of particles.