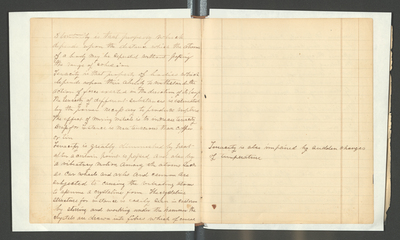 Flexibility is that property which depends upon the distance which the atoms of a body may be separated without pafsing [passing] the range of cohesion.

Tenacity is that property of bodies which depends upon their ability to withstand the action of force exerted in the direction of its length. The tenacity of different substances is estimated by the power necefsary [necessary] to produce [rupture]. The effect of mixing [metals] is to increase tenacity. Brafs [Brass] for instance is more tenacious than copper or tin.

Tenacity is greatly diminished by heat after a certain point is pafsed [passed] and also by a vibratory motion among the atoms such as car wheels and axles and [cannon] are subjected to causing the vibrating atoms to assume a crystalline form. The crystalline structure for instance is easily seen in [cast iron] by stirring and working under the hammer the crystals are drawn into [fibres] which of course

Tenacity is also impaired by sudden changes of temperature]