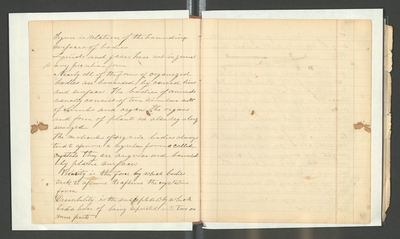 Figure is relation of the bounding surfaces of bodies.

Liquids and gases have not in general any peculiar form.

Nearly all of the forms of organized bodies are bounded by curved lines and surfaces. The bodies of animals usually consist of two similar sets of limbs and organs. The organs and form of plants are also regularly arranged.

The molecules of inorganic bodies always tend to afsume [assume] a regular forms called crystals they are angular and bounded by plane surfaces.

Divisibility is the susceptibility which bodies have of being separated into two or more parts.