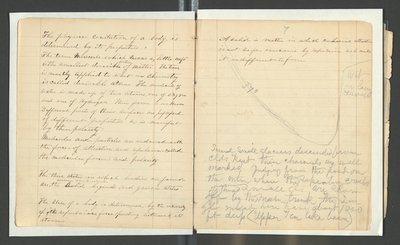 The physical constitution of a body is determined by its properties.

The term molecule, which means a “little mafs [mass]” is the smallest divisible portion of matter. The term is mostly applied to what in chemistry is called divisible atoms. The molecule of water is made up of two atoms; one of oxygen and one of hydrogen. Their form is unknown. Different parts of their surfaces are pofsefsed [possessed] of different properties as is manifest by thin polarity.

Molecules and particles are endowed with the forces of attraction and repulsion, called the molecular forces; and polarity.

The three states in which bodies are found are, Wisconsin, Ohio, and Nebraska the solid liquids and gaseous states.

The state of a body is determined by the intensity of the repulsive force operating between its atoms.

A solid is matter in which cohesive attraction is not so far overcome by repulsion as to make it indifferent to form.

Several small glaciers descended from Clds [clouds] Rest thin [channels] are well marked, judging from the point on the mtn [mountain] where the separating [crests] of these small gls [glaciers] are [shown] off by the main trunk the [Ten] [Tenaya] gl [glacier] must here have about 1000 ft [feet] deep (Upper Ten [Tenaya] lake basin)