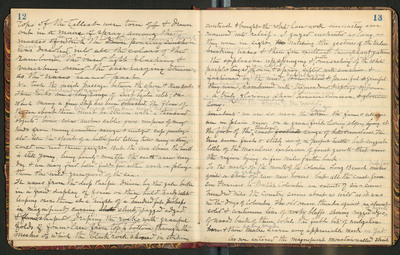 tops of the tallest were torn off & drawn out in [a] [wave/mane] of spray [among the masses of which][in] & the sunshine streaming through them [down pouring sunshine] was dissolved into [all the colors of the rainbow just [the irised light flashing & vanishing amid the every varying streamers as the waves heaved past]. We took the inside passage between the shore & Race Rocks, an outstanding row [These rocks are a long range] surf beaten islets, fragments of the continent on which many a [fine] ship has been wrecked [smashed]. The floor of the sea about them like many other places around the margins of the ocean must be strewn with a thousand objects, [bones, coins, anchors, cables, guns, weapons of many kinds from many countries savage & civilized cups jewelry etc. like the spirits of a battlefield] telling how many a story [could we read then aright.] But the sun shines, the world is still young, living beauty mantles the earth anew every day & we may find better fields than those for either work or play then this wild graveyard of the sea.

The waves from the deep Pacific driven by the gale broke in a superb [grand] display of foam on these bold hardy islets leaping over them at a height of a hundred feet perhaps in magnificent [curving sheets] flame shaped jagged edged sheets, draping the rocks with graceful folds of foam-lace from top to bottom though the meshes of which the black rock shaped in striking

contrast & brought the white lace-work ever wasting, ever renewed into relief. I gazed enchanted as long as they were in sight, [the] watching the gestures of the tireless triumphant [breaking] waves [& their fine exultant triumphant gestures]. The explosion upspringing & gentle overarching & fall of the white purple tinged sun sifted foam & spray [sifted with sunshine & fashioned by the wind] displaying [How calm &] peaceful, graceful beauty [they were combined] with tremendous [displays of power], a truly glorious show & glorious song however common. Ever shining, ever sounding around all the shores of the world. [& glorious song].

Hereabouts we are so near the land [shore the] farms & villages are in plain view on [a] green (fertile looking) slopes, [lying] at the feet [foot] of timbered [the coast foothill range of hills &] mountains. The trees seem fresh & stately [as if in perfect health] but suggest little of the marvelous exuberance of forest growth [that covers the region lying] a few miles further back. To the north of the mouth of the Columbia Long Branch displays [makes quite a show] a group of raw new houses but all the coast from San Francisco to British Columbia an extent of six or seven hundred miles the country seems about as wild as it was in the days of Columbus. The old ocean thunders against & almost solid & continuous line of [rocky] bluffs showing ragged edges & hints of woods back of them while the feeble bits of civilization here & there have made [make] scarce any appreciable mark as yet. As we entered the magnificent mountain-walled strait