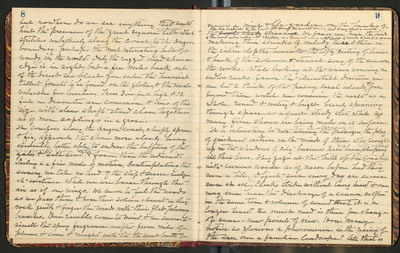 but nowhere do we see anything that would hint the presence of the Great Sequoia Redwood belt which stretches unbrokenly along the coast to the Oregon boundary. Perhaps the most interesting belt of woods in the world. Only the rugged wind shorn edge of it is in sight but a few miles back out of the direct sea blast you enter the heaviest tallest forests to be found on the globe, & the most valuable for lumber. Trees 300 feet height & 12 feet in diameter are common, & trees of this size with clear shafts stand close together as if mere saplings in a grove.

The conifers along the Oregon Coast, chiefly spruce & fir, approach the shore more closely being evidently better able to endure the buffeting of the [gales &] sea winds laden with salt scud & foam than the redwood. Sailing in a fine mode of motion, contemplating the scenery we take no heed of the ship & scarce realize its existence while we are borne through the air as if on wings. We seem to feel the woods as we pass them, & hear their solemn chant as they rock gently & finger the winds with their flat plumey branches. Our rambles come to mind & we seem to smell the spicy fragrance wafted from miles of plumes & cones & mingled with the the sweet breath of

many a mint & lily garden on the banks of the [cool shady] streams. The sea speaks to the land all round the world shouting aloud to every island or [mere] rock & the land also responds speaking in a thousand voices with choirs of cascades & falls to its 1000 [waves] We fancy we hear the birds making thin streaks of melody [here & there] in the woods [calm depths beneath the lofty ceiling of leaves & bark] of the solemn & eternal song of the sea [on the rocks]. While looking at the waves coming in endless ranks from the illimitable distance we are lead to think of the palmy coral islands & far beyond the until we conceive the world as a whole, round & watery & bright bravely spinning through space [as a quiet steady star] while so many fine shows are being made on its surface. It is interesting to note the awakening of [among] the passengers, the play of quickened action in the minds of those who brought up in the shadows of city business have long been half asleep [sleeping all their lives]. They gaze at the coast hills [of the] with curious wonder as if never before had they seen a hill, objects seen every day are scarce seen at all, like clocks which strike without being heard & one may even hear the discharge of a cannon so often in the same tone & volume of sound that it is no longer heard. So much need is there for change of scene – new points of view. How many notice so glorious a phenomenon as the rising of the sun over a familiar landscape? All that is