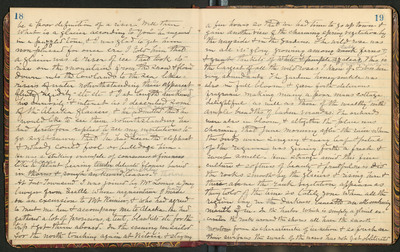 be a poor definition of a river. “Well then, what is a glacier according to you”, he inquired in a puzzled tone & I was glad to get him non-plussed for once ere I told him that a glacier was a river of ice that took its rise on the mountains from the snow & flowed down into the lowlands to the sea like a river[s] of water notwithstanding its [their] apparent flinty rigidity etc etc & I at length succeeded in awakening[ed] his curiosity & interest as I described some of the Alaska Glaciers & [he] at length reluctantly admitted that he would like to see them, notwithstanding he had heretofore replied to all my invitations to go sightseeing that “he had already seen the elephant & nobody could fool or bulldoze him.” He was a striking example of [coarseness &] fine[ness] roughness like a plant bearing [tender] delicate flowers buried in [thorns & rough awkward rasping] prickly leaves & thorns.

At Fort Townsend I was joined by Mr. Loomis, a young lawyer from Seattle whose acquaintance I had made on an excursion to Mt. Rainier & who had agreed to meet me here & accompany me to Alaska. He had gathered a lot of provisions, a tent, blankets etc for the trip & got them aboard. In the evening we sailed for the north touching again at Victoria & staying

a few hours so that we had time to go up town & gain another view of the charming spring vegetation by the wayside in the gardens. The wild rose was in all its glory, growing among [tall] [rank] ferns & great thickets of white & purple azaleas, & next to the sweet briar this is the largest of all the wild roses I know of. [& it is here] & next to the sweet brier the most fragrant [very abundant]. The garden honeysuckle was also in full bloom & gave forth delicious fragrance making many a poor mans cottage delightful (as well as the mansions [those] of the wealthy delightful with ample breadths of laden verandas). The orchards were also in bloom & altogether the place was charming that June morning after the rain where the birds were singing & every leaf & petal [of the region] was giving forth a fresh & sweet smell. How strange amid this fine culture & softness of beauty & fruitfulness [did] the rocks smooth by the glaciers & rising here & there above the rank vegetation appear as they told of the time so lately gone when all the region lay in [the] darkness beneath an all-embracing mantle of ice. In the harbor which is simply a glacial excavation the rocks around the shores all have the smooth [montonic] form so characteristic of ice-action & so fresh are their surfaces the swash of the waves has not yet obliterated