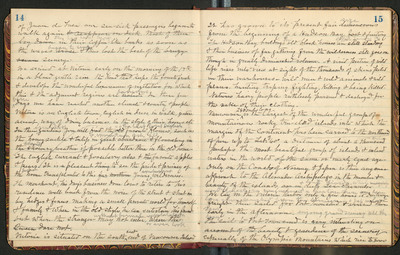 of Juan de Fuca our sea sick passengers began to walk again [and reappear on deck. Most of them lay down] They had been lying in their coffin-like bunks as soon as the waves began to sing [arose] & thus lost the best of the [breezy ocean] scenery.

We arrived at Victoria early on the morning of the 17th in a bland gentle rain, the kind that keeps the forests fresh & develops the wonderful luxuriance of vegetation for which this & the adjacent regions are famous [noted]. In these few fine days we have reached another climate & country of people. Victoria is an English town, English in dress, in walk, in gestures, accent, ways of doing business, in the style of their homes, etc. In their orchards & gardens you will find the [old] favorite flowers, such as the honeysuckle, [&] tulip & mountain ash all [in great abundance &] flourishing [in the bland] showery weather if possible better than in their old home. & the best of loved English currant & gooseberry [also] & [the] favorite apples & pears. It is [a] pleasant [thing] to see the pride & privacy of the English home transplanted to this [far northern] young [exuberant] wilderness. The merchant, his day’s business done loves to retire to his residence well back from the noise of the street & shut in by hedges & fences making a small private world for himself & family [&] when in the old style he can entertain his friends but where the stranger may not enter without formal invitation or even look [Where the Queen dare not].

Victoria is situated on the south east end of Vancouver Island

It has grown to its present fair size [dimensions] from the beginning of a Hudson Bay fort & factory. [The Hudson Bay buildings] The old block houses of that famous Co. [company] are still standing & their business of fur gathering from the wildernesses still goes on [though in greatly diminished volume]. A vivid picture of wild life rises into view at sight of the thousands of skins piled in their warehouses. Wild men & wild animals & wild places, hunting, trapping, fighting, killing & being killed. Nature’s hairy people ruthlessly pursued & destroyed for the sake of their clothing.

Vancouver 280 miles long, is the largest of the wonderful groups of mountainous rocky tree-clad islands into which the margin of the Continent has been carved to the northward [of here] up to Lat. [latitude] of 60° [degrees] a distance of about a thousand miles perhaps the most beautiful group of islands & inland waters in the world [of the same or nearly equal size]. Only on the Coast of Norway & Japan is there any near approach to the Alexander Archipelago in the number [& beauty] of the islands [or in] & long fiords [fjords] while [magnificent] the forest is so magnificent a feature here [are] have long since vanished from the Norwegian & Jap [Japanese] inland seas. We lay in the Victoria harbor only a few hours to discharge freight then sailed for Port Townsend & arrived there early in the afternoon enjoying grand scenery all the way.