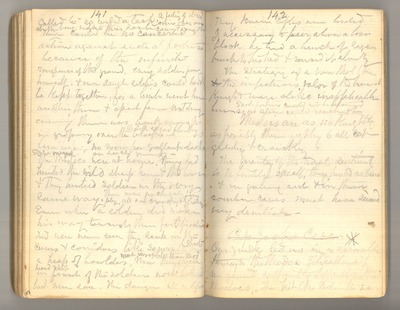 141 called to so wild a task. A feeling of dred [comes] over one [at] the very [sight] to these [somber] caves & scary [chasm] There could be no concerted action against such a fortress because of the infinite roughness of the ground, every soldier for himself & even single soldiers could hardly be kept together, for a limb went here another there & apart from watching enemy there was work enough in groping over the blocks ~ sharp edged flinty lava heap. [Strife] [ ] No room for gallant dashs on such grounds. The Modocs here at home, they had hunted the wild sheep here & the bear & they hunted soldiers in the very same way. There was no chivalry fair play, all cat crouchy & [gliding] Even when a soldier did make his way towards their fortifications Ind [indians] were never seen they sank in the caves & corridors like squirrels in a heap of bowlders. ghosts more invisible than Mod [Modoc] Now they even heard shot in front of the soldiers now behind but never seen. The dangers all in [defense]

142 They knew rifles were leveled If necessary to peer above a low block he tied a bunch of sage brush to his hed & raised it slowly The strategy of a [non] [ ] [at] the [impetuous] valor of the [ ] knight were alike inapplicable here Such fortress could not be stormed as no storm could reach it Modocs are as unknightly as possibly their fighting is all cat [glidy] & [crouchy] The [quantity] of the [moral] [sentiment] is infinitely small, they hunted as [bears] & in going out & in these somber caves must have seemed very devilish [Cap Jacks Cave] * Our guide led us in a scramble [through] the Modoc Gibraltar wh [which] we found sufficiently difficult [ ] Modocs. The pit like redoubts we