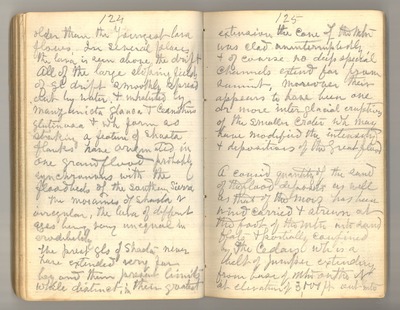 124 older than the youngest lava flows. In several places the lava is seen above the drift All of the large sloping fields of gl [glacial] drift smoothly spread out by water. & inhabited by manzanita glauca & ceanothus glutinosa & wh [which] form so striking a feature of Shasta flanks have originated in one grand flood probably synchronous with the floodbeds of the southern Sierra The moraines of Shasta v [very] irregular, the lava of different ages being very unequal in erodibility The [prest] gls [glaciers] of Shasta never have extended very far [hey] and [their] present limits while distinct in their greatest

125 extension the cone of the mtn [mountain] was clad uninterruptedly & of course no deep special channels extend far from summit, moreover their appears to have been one or more inter-glacial eruptions of the smaller crater wh [which] may have modified the intensity & depositions of the great flood A consid [considerable] quantity of the sand of the flood deposits as well as that of the mors [moraines] has been wind carried & strewn at the foot of the mtn [mountain] into sand flats & partially confined by The Cedars wh [which] is a belt of junipers extending from base of mtn [mountain] on the N at elevation of 3,000 ft out into