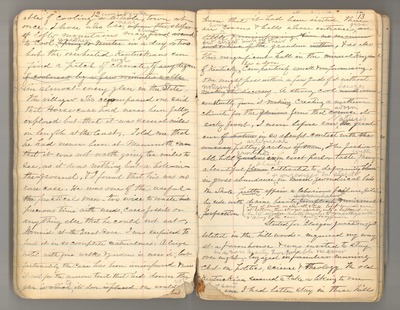 capable of cooling everybody in the town at once. Those who live near lofty mountains may climb to cool weather in a day or two, but the overheated Kentuckians can find a patch of cool climate in almost every glen in the State. The villager who accompanied me said that Horse[shoe] cave had never been fully explored, but that it was several miles in length at least. Told me that he had never been at Mammoth cave – that it was not worth going ten miles to see, as it was nothing but a hole-in-the-ground; and I found that his was no rare case. He was one of the useful-practical men, too wise to waste precious time with weeds, caves, fossils or anything else that he could not eat. Arrived at the Great Cave. I was surprised to find it in so complete naturalness. A large hotel with fine walks and gardens is near it, but fortunately the cave has been unimproved and were it not for the narrow trail that leads down the glen to its door one would not know that it had been visited. There are house rooms and halls whose entrances give but slight hints of their grandeur, and so also this magnificent hall in the mineral kingdom of Kentucky has a door comparatively small and unpromising. One might pass within a few yards of it without even noticing it. A strong cool breeze issues constantly from it, creating a northern climate for the ferns that adorn its rocky front. I never before saw Nature’s grandeur in so abrupt contact with paltry artificial gardens. The fashionable hotel grounds are in exact parlor taste, with many a beautiful plant cultivated to deformity in gross abundance and arranged in strict geometrical beds, the whole pretty affair a laborious failure, side by side with divine beauty. Trees at brink are smooth and tall, bent towards cave at bottom, then straight upwards; only a butternut seems by its angular knotty branches to sympathize with and belong to the cave. Cystop[us] and hypnum. Started for Glasgow junction, - got belated in the hill woods. Inquired my way at a farmhouse and was invited to stay over night in a rare, hearty, hospitable manner. Engaged in familiar running chat on politics, science, and theology. The old Kentuckian seemed to take a liking to me and said I had better stay in these hills