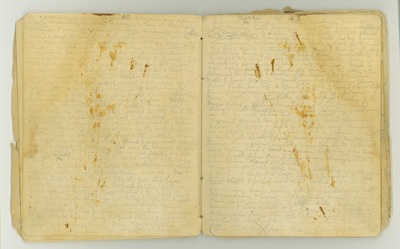 42 so commonly found in granite [canyons] are almost wholly a wanting in slate [canyons]. This is the first instance I have discovered of large avalanche on [glacier] wished to reach the head of this gl [glacier] after ascending [ ] [dist] came to where the avalanche by wh [which] I was making the attempt so loosened by melting of snow and ice beneath them it constantly gave way in small slides that rattles past with some danger. [Therefore] tried the gl [glacier] itself, but the surface was bare of snow and steps had to be cut. This soon became tedious & I again attempted to thread my way cautiously among the ill settled avalanche stones. had here and there to clear away ground and cut steps [] here . At length reached top, examined the wall above gl [glacier] and thought it possible & might be scaled where avalanches descended [ ] worked cautiously up face of cliff above the ice wild looking & wilder every step down halted by dangerous step. Passed it with knit lips. Again halted, made little foothold with hatchet. Again stopped, made horizontal movements and avoided this place again stopped by fine gravel covering the only possible foot or hand holds cleared away with hatchet holding on with one hand the while. Hard to turn back especially when the danger is certain but now the sky was black as the rocks and I saw that rain was falling on the [peaks] of the Merced group. Besides the rocks seemed in the shapes they took to be determined to baffle me. determined to attempt return. after most delicate caution in searching for & making step[s] reached the head of the gl [glacier] [cut] step began to work my way down. Now the first lightening shot was fired among the sharp crags overhead the wind hissed & [ ] among the steep spires. the top of Ritter was capped with clouds as if [shorn]. Yet loomed aloft higher [Oh] grandly the black spires came out on pale edges of the storm cloud [hang] behind them. Never seen more impressive storm. [More and more] lightening but as yet no rain here [Saw] it falling above & by all 43 & towards Merced group. ran down avalanche excitedly half enjoying half fearing. Was clad free as Highlander yet cared not for a wetting. Yet on whole thought should [be] [ ] [right] [ ] endeavor to reach camp at once. Started bent on passing along face of the grand Spire. Made a dash for the summit of a pass nearly in the middle of the group of Minarets thinking that I was sure of a wetting in any case reached the top by careful climbing wh [which] was difficult towards top. Pass is exceedingly narrow some places only a few [feet] Made by water and snow [ ] on dissolvable seams in the slate wh [which] determined the position and direction of the neves of the gls [glaciers] below walls of pass vertical & grand beyond description, glorious view broke from top a grand gl [glacier] of wh [which] I could see a strip from yet narrower gorge pass [of] E [East] side volcanoes of Mono. Section of [fine] lake also a good portion of the Inyo Mtns [Mountains] [Splendid] irised cloud [sailing] overhead. Black [clouds] disappearing. [Wind] playing wild music on the minarets as on an [instrument.] Began to descend Mono side, the gl [glacier] hard clear ice, reached to top of pass. Had to cut steps very carefully as a slip of one step would [insure] a glissade of half a mile at death speed. Wedged myself most of way through the narrow lane like gorge between the ice & wall also cutting steps [hard] unhuman pathway & as now look back from camp fire seems strange I should have dared its perils. Came out at East after giving a half [hour] consideration of position of steps & to look back upward at the wild wild cliffs & wild wild clds [clouds] rushing over them. On reaching main portion of the gl [glacier] was delighted with its grandeur & beauty, its splendid [curves] & [ ] crevasses & ice cataracts & with the noble landscape reaching far south & E [east]. Mono lake & [between] volcanoes. Inyo Mtns [Mountains] gl [glacial] lakes at foot of the [glaciers] united to each other by land white [cataracts]. (This gl [glacier] is a [perfect] maze of yawning crevasses.