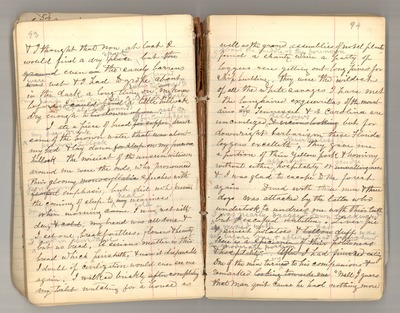 and I thought that now at last I would find a dry spot, but even the sandy barrens were wet and a I had to grope about in the dark a long time feeling the ground with my hands when my feet ceased to plash, before I at last found a little hillock dry enough to rest on. I ate a piece of bread I fortunately had in my bag, drank some of the brown water about my precious hillock, and lay down. The noisiest of the unseen witnesses around me were the owls, who pronounced their gloomy speeches with profound emphasis, but did not prevent the coming of sleep to heal weariness. In the morning I was cold and wet with dew, and I set out breakfastless. Flowers and beauty I had in abundance, but no bread. A serious matter is this bread which perisheth, and were it dispensable I doubt if civilization would ever see me again. I walked briskly, watching for a house as well as the grand assemblies of novel plants. About the middle of the forenoon I found a shanty where a party of loggers were getting out long pines for ship building. They were the wildest of all the white savages I have met. The long-haired ex-guerrillas of the mountains of Tennessee and N. Carolina are uncivilized fellows, but for downright barbarism these Florida loggers excelleth. Nevertheless they gave me a portion of their yellow pork and hominy without either apparent hospitality or grudge, and I was glad to escape to the forest again. Dined with three men and three dogs. Was attacked by the latter, who undertook to undress me with their teeth. I was nearly dragged down backward, but escaped unbitten. Liver-pie mixed with sweet potatoes and fat duff was set before me, and after I had finished my moderate portion, one of the men, turning to his companions remarked, “Well, I guess that man quit cause he had nothing more