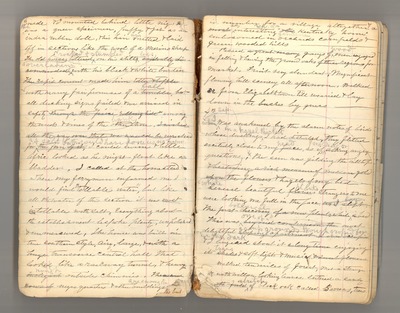 made, and I mounted behind the little nig. He was a queer specimen, puffy and jet as an india rubber doll, and his hair was matted and laid off in sections like the wool of a merino sheep. The old horse, overladen with his black and white burden, rocked and stumbled on his stilt legs, with many fair promises of a fall, but all ducking signs failed and we arrived in safety among the weeds and vines of the bank. A salt bath could have done us no harm. I could swim and little Afric looked as [if] he might float like a bladder. I called at the homestead where my ferryman informed me I would find “tollable water”, but like all the water of this section it was intollable with salt. Everything about the establishment bespoke of plenty, unpolished and unmeasured. The house was built in true southern style, airy, large, and with a transverse central hall that looked like a railway tunnel, and heavy rough outside chimneys. The negro quarters and other buildings are enough in number for a village, -- altogether an interesting representative of a “genuine Kentucky home”, embosomed in orchards and cornfields and green wooded hills. Passed gangs of woodmen engaged in felling and hewing the grand oaks for market. Fruit very abundant. Magnificent flowing hill scenery all afternoon. Walked S.E. from Elizabeth town till wearied and lay down in the bushes by guess. Sept. 4. The sun was gliding the hilltops when I was awakened by the alarm notes of birds whose dwelling in a hazel thicket I had disturbed. They flitted excitedly close to my head, as if scolding or asking angry questions, while several beautiful plants, strangers to me, were looking me full in the face, -- the first botanical discovery. This was one of the most delightful camp grounds, though groped for in the dark, and I lingered about it enjoying its trees and soft lights and music. Walked ten miles of forest; met a strange oak with willow-looking leaves; entered a sandy stretch of black oak called Barrens, trees,