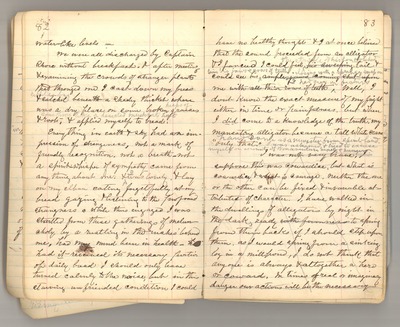 water-like levels. We were all discharged by Captain Shore without breakfast, and after meeting and examining the crowds of stranger planters that thronged me, I case down my press and little bag beneath a shady thicket where was a dry place on some broken heaps of grasses and roots, something like a deserted muskrat’s hut, and applied myself to break. Everything in the earth and sky had an impression of strangeness, not a mark of friendly recognition, not a breath – not a spirit-whisper of sympathy came from anything about me, and I was lonely and lay on my elbow eating forgetfully at my bread, gazing and listening to the profound strangeness. While thus engaged I was startled from these gatherings of melancholy by a rustling in the rushes behind me. Had my mind been in health, had it received its necessary portion of daily bread I should only have turned calmly to the noise, but in this starving, unfriended condition I could have no healthy thoughts, and I at once believed that the sound proceeded from an alligator, and I fancied I could feel the stroke of his long notched tail and could see his big jaws and rows of teeth closing with a springy snap on me, [as] I had seen in pictures. Well, I don’t know the exact measure of my fright either in time or pain, but when I did come to a knowledge of the truth, my man-eating alligator became a tall white crane, handsome as a minister from spirit-land – “only that.” I was ashamed, and tried to excuse myself on account of Bonaventure anxiety and hunger. I was not very brave. I suppose this was cowardice, but what is cowardice, and what is courage – neither the one or the other can be fixed and invariable attributes of character. I have walked in the dwellings of alligators by night in the dark, ready to spring from their backs if I should step upon them, as I would spring from a sinking log in a mill pond. I do not think that anyone is always and altogether a hero or coward. In times of real or imaginary danger our actions will be the necessary