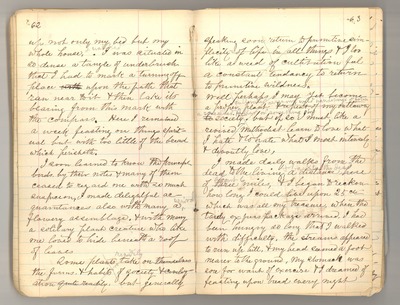 up not only my bed but my whole house, and walked. I was situated in so dense a tangle of underbrush that I had to mark a turning off place upon the path that ran near to it, and then take its bearing from this mark with the compass. Here I remained a week feasting on things spiritual, but with too little of the bread which perisheth. I soon learned to know the principal birds by their notes and many of them ceased to regard me with so much suspicion. I made delightful acquaintances also with many a squirrel, flowery assemblage, and with many a solitary plant creature who, like me, loved to hide beneath a roof of leaves. Some plants readily take on the forms and habits of society, but generally speaking soon return to primitive simplicity, and I too, like a weed of cultivation feel a constant tendency to return to primitive wildness. Well, perhaps I may yet become a proper cultivated plant, cease my wild wanderings and form a so-called pillar or something in society, but if so I must, like a revived Methodist, learn to love what I hate and to hate what I most intensely and devoutly love. I made daily walks from the dead to the living and back to the dead, a distance of about 6 miles, and I began to reckon how long I could live upon 25 cts. which was all my treasure. When the tardy express package arrived I had been hungry so long that I walked with difficulty, the streams appeared to run uphill, and my head seemed a foot nearer to the ground. My stomach was sore for want of exercise, and I dreamed of feasting upon bread every night.