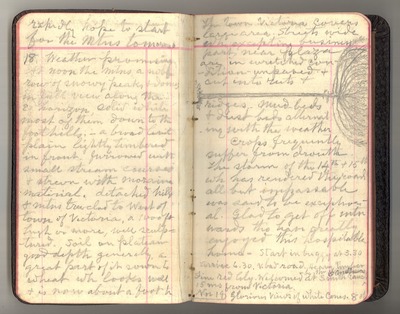 rapidly. Hope to be able to start for the mountains tomorrow. Nov. 18. Sky almost cloudless. At noon the mountains, a noble row of snowy peaks and domes, were in full view along the Eastern horizon. Most of them solid, immaculate white down to the foothills. A broad level plain in front, lightly or heavily timbered, furrowed with small stream-courses, and strewn with moraine material. Detached hills and mountains to the westward of the town of Victoria are uniformly tree-clad except where cleared for wheat fields. These coast mountains are perhaps upward of 1000 feet in height and finely sculptured. The soil on the plain or plateau is apparently deep and somewhat sandy. A great part of it sown to wheat, which looks well and is now about a foot high. The town of Victoria covers a large area. The streets wide, which, excepting the business part near the Plaza, are in a wretched condition, unpaved and cut into ruts and ridges, with mud-beds and dust-beds alternating with the weather. Crops are said to suffer frequently from drought. The storm of the 14th and 15th, which has rendered the roads all but impassable, was said to be exceptional. Glad to get off at last mountainward, though have greatly enjoyed this hospitable home. Start in buggy at 3:30 P.M. Light buggy, drawn by two horses and driven by one of Mr. Smith’s sons. Extremely bad road. Much of it is corduroyed with crooked logs. Bridges also over many streams are in very bad condition. So much so that the middle of the road is shunned and the travel passes on either side, fording the streams now often belly deep with the horses, and bordered with mud about as deep. Several places we nearly lost both horses and buggy. Heavy timber on either had as far as the eye could reach. Very few fields have been cleared. Only the smaller trees have been uprooted; the larger ones have simply been burned and killed so that they stand melancholy, black monuments, some of them nearly a hundred feet high, forming the most untidy and ragged fields imaginable. A species of lily of a striking red color common along the fences. Arrived at 6:30 at the Smith ranch, some fifteen miles from Victoria, and was welcomed by another of Mr. Smith’s many friends. Nov. 19. I wandered through broad wheat fields a mile or two from the ranch house and obtained magnificent views of some eight great white volcanic cones, ranged along the axis of the mountains. Spent the day sketching