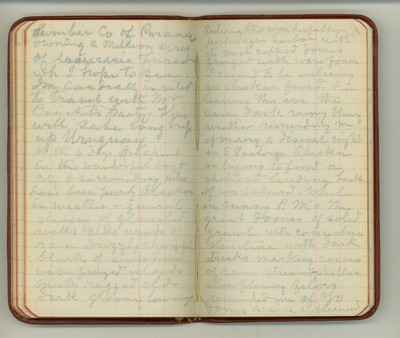 Parana Lumber Company, owning nearly a million acres of araucaria forest, which I hope to see. I am cordially invited to travel with Mr. Bouchet’s party. This will save me a long trip up the Uruguay River. The only definite information that I have of the araucaria braziliensis, which I was determined to fined, was from Prof. Banner, who showed me two photographs taken somewhere on the upper Uruguay River, in which a few groups of these trees were seen in the general forest of the region. But on my way from Para to Rio I made the acquaintance of Mr. Harell, who, with a party of eight or ten, was on his way to work on a large mill that was about completed in the State of Parana, situated about three or four hundred miles to the west of Curytiba. I inquired what kind of timber they were going to cut and they said that it was called Brazilian pine, but that he had never seen any of those trees. He told me, however, that from a description he got from one of the mill men who had been in that work there, they were trees that were perhaps one hundred feet high without limbs; that the limbs were all in a bunch at the top. I had little doubt from this description that they were the trees I was in search of, and said I would be very glad to go to the mill in their company if they would allow me, and he said he had no doubt that I would be welcome there. All the four days I have spent in the wonderful Rio bay and city and surrounding mountains have been purely Alaskan in weather and general scenery of glaciated rocks, clouds, winds, rains, drizzly changeful blinks of sunshine, rounded wave-fringed islands, misty ragged clouds, dark gloomy lowering. Entering the wonderfully picturesque harbor with its mist-capped dome fringed with wave foam, I seemed to be entering an Alaska fiord, and in leaving the bay this evening the same dark rainy blowy cold weather reminding me of many a dismal night in Southeastern Alaska, when I was trying to find sheltered landing back of an island. While in sunny afternoons the great domes of solid granite, with concentric structure and dark steaks marking the courses of rain streams in shallow slow-flowing films reminded me of Yosemite domes that are