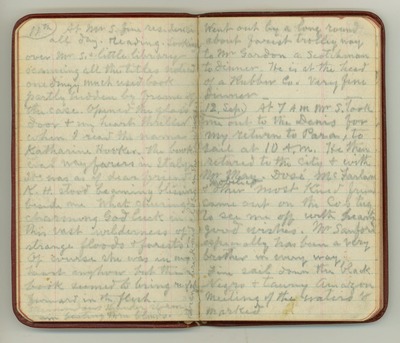 September 11, 1911. At Mr. Sanford’s fine residence all day. Reading. Lookning over Mr. S.’s little library, scanning all the titles. Noticed one dingy, much-used book, partly hidden by the frame of the case. Opened the glass door, and joyfully read the name “Katherine Hooker - Wayfarers in Italy.” It seemed as if my friend was actually present in the flesh. What wonderful luck I had in this vast wilderness of strange floods and forests. Went out by a long, round-about trolley way through the woods to Mr. Gordon’s. A scotchman. Dined with him. He is at the head of a Rubber Company. Very fine dinner. September 12, 1911. At 7:00 A.M. Mr. Sanford took me out to the Dennis for my return to Para, to sail at 10:00 A.M. He then returned to the city and with Mr. May, Dose, McFarland, and Robardia, and with other most kind friends came out on the Company’s tug to see me off with hearty good wishes. Mr. Sanford especially has been a very brother in every way. Col. May gave me a pressing invitation to go as a guest with him up the Madeira and over the railroad. This I was eager to accept as I would see so much of the forest in near views, but when I inquired when he would start he informed me that it would be in about a month, and that it would be perhaps another month before I could return to Manoas. This I judged was too long a time to spend in one place when I had so great a journey before me in other parts of the continent. The same difficulty in regard to time prevented me from going, as I intended, to Iquitos, twelve hundred miles farther up the river, to which point, indeed, I had already purchased a ticket, but the steamship on this line belonged to another Company and I was informed that perhaps it would be a month or so before one of these steamers on the upper river would start from Manoas for Iquitos. That the trip would be very long, requiring from ten to twenty days; that perhaps still another month would be required to return to Manoas. So that in either of those two trips I would have to remain on the upper river for at least two and perhaps three months. Concluding that I could put in the time to better advantage I reluctantly set out on the return journey to Para. Fine sail down the black Negro and tawny Amazon. I watched with increasing interest the meeting of those two great streams, the black and the yellow.