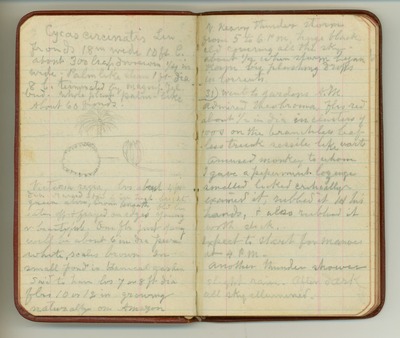 Cycas Circinatis, some of the fronds eighteen inches wide, ten feet long. About three hundred divisions in the leaf. A quarter of an inch in width. Palm-like stem one foot in diameter, eight feet long, terminated by a magnificent yellow bud. The whole plant palm-like. About sixty fronds. In a large tank a Victoria Regia with leaves about four feet in diameter and with raised edges four inches high, bright green above, brown and prickly beneath. Old leaves were somewhat eaten off and frayed on the edges. The young leaves very beautiful. One flower is just opening. When fully opened it will probably be about six inches in diameter. Pure white. Some of the leaves of this magnificent lily are said to be seven or eight feet in diameter, with flowers ten or twelve inches in diameter, when growing naturally in lakes on the margin of the Amazon. Very heavy thunder storm from five to six o’clock in the afternoon. A huge black cloud covering all the sky. Storm began when the cloud covered only one half the sky. Big plashing raindrops failing in torrents. August 31, 1911. In the forenoon went to the gardens again. Admired the Theobroma tree, with its red flowers about one half inch in diameter growing in clusters of hundreds, like huge warts on the branchless leafless trunk. These flowers are sessile and grow on the smooth bark down to the very ground. In the Zoological Gardens I was greatly amused at one of the monkeys holding out its hands through the bars and begging for something to eat. I handed him a peppermint lozenge, something that so excited his curiosity that he probably had never before seen anything of the sort. He first smelled it, then held it back and critically examined it, touched the end of his tongue with it very cautiously as though afraid it might be poisonous, rubbed it between his hands, then picked up a small stick and gave it a good rubbing with the stick, then tasted it again. Evidently he had never tasted anything like it before. Another thunder shower. After dark all the sky was illumined with sheet lightning at short intervals. Expect to start for Manos at 4:00 PM