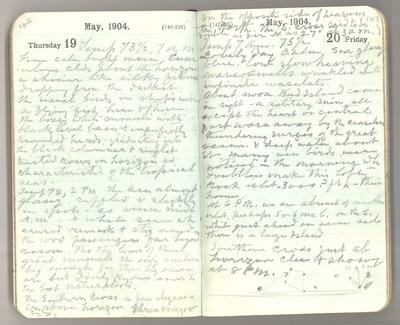 May 19. Temperature 73 ½°, 7:00 A.M. Fine calm bright morning. Cumulous clouds about the horizon, a shower-like silky film dropping from the darkest. The usual birds in ship’s wake, a flying fish here and there. The bossy white cumuli with black level base, and imperfectly rounded heads, graduating into the black columnar and ringlet-twisted rows on horizon so characteristic of the tropical seas. Temperature 78° 2:00 P.M. The sea almost glassy, ruffled very slightly in spots, so, since middle of the morning. A whale seen which caused remark and stir amid the thousand passengers, far beyond reason, though the lives of these great mammals, the only creatures big enough for this big ocean, are but dimly known even to the best naturalists. The Southern Cross a few degrees above horizon, Ursa Major on the opposite side of heavens, the north. The Southern Cross said to be visible as far north as 27° at 3:00 A.M. May 20. Temperature 7:00 A.M. 75 ½°. Lovely day, calm, sea glassy blue. Low slow-heaving wave swells wrinkled with infinite wavelets. About noon, Bird Island came in sight - a solitary ruin all except the heart or central part worn away by the ceaseless thundering surges of the great ocean. Very deep water about it. Many new birds were noticed in the morning which doubtless make this lofty rock islet, 3000 feet high (/) their home. At 6:00 P.M. we are abreast of another islet, perhaps 5 or 6 miles long, on the south, while just ahead on same side, there is a large island. Southern Cross just above horizon, clear and showy at 8:00 P.M.