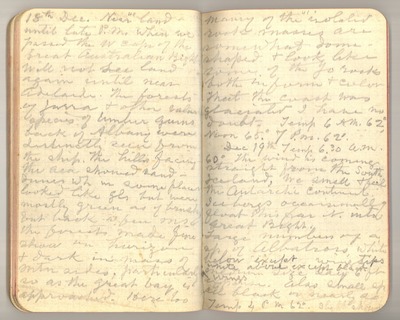 December 18th Near land until late P.M. when we passed the West Cape of the great Australian Bight. Will not see land again until Adelaide. The forests of Jarra and other valuable species of timber gums back of Albany were distinctly seen from the ship. The hills facing the sea showed sand dunes which in some places looked like glaciers, but were mostly green as of brush, but back a few miles the forests made fine show on horizon and dark in mass of mountain sides, particularly so as the great bay is approached. Here too many of the isolated rock masses are somewhat dome-shaped and look like some of the Yosemite rocks, both in form and color. That the coast was glaciated I have no doubt. Temperature 6:00 A.M. 62, Noon 65. 7:00 P.M. 62. December 19th Temperature 6:30 A.M. 60. The wind is coming straight from the south. Ice land, we smell and feel the Antarctic Continent. Ice bergs occasionally float this far north into Great Bight. Large numbers of a species of Albatross white below except wing tips, white above except black wings, medium size, say, 6 foot expanse. Also small species all black or nearly so. Temperature 4:00 P.M. 62. Slight shower,