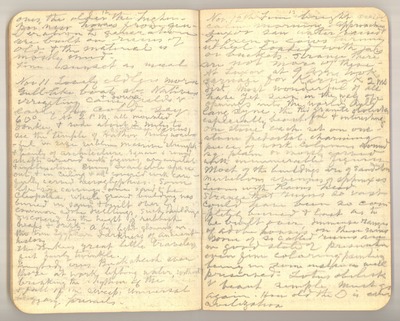 ones, the older the higher, for new houses from generation to generation are built on ruins of old, and the material is mostly mud. Fine sunset as usual. November 11th Lovely cloudless morning. Gull-like boats abundant. Natives irrigating cane and dourti[cotton?] fields very early though cold, say 60°. At 2:00 P.M. all mounted donkeys and rode about 2 miles to see the Temple of Hathor, Egyptian Venus, truly wonderful in size, sublime massive strength and beauty of architecture; square and round shafts covered with figures ornamental and instructive. Every available space out, and in ceiling and all covered with carefully carved hieroglyphics. Some life-size carvings, one said to be Cleopatra. Whole grand building was buried in sand and built over by common adobe dwellings, such buildings discovered by the height of rubbish heaps and drifts. A big light glowing in the true Egyptian darkness of ancient history. The donkeys great little travelers, feet fairly twinkle. Everybody cries “baksheesh”, even those at work lifting water, without breaking the rhythm of the rise and fall of the sweep. Universal beggary prevails. November 12th Fine bright cool calm morning, approaching Luxor. Saw water raised by oxen or cows turning wheel loaded with jars or buckets. Strange there are not more of these. At Luxor 9:00 A.M., took carriage for Karnak, 2 miles distant. Most wonderful of all have yet seen in the way of openings into the world’s auld lang syne. The red granite obelisk especially beautiful and interesting. One stone each set on one stone pedestal, charming pieces of work. Columns round, square, plain or mostly carved with innumerable figures. Most of the buildings are of sandstone, marvellous avenues of sphinxes, lions with ram’s head. Strange that ruins so vast could have been so completely buried and lost as to be built over. Immense ranges of adobe houses on these ruins, some of so-called ruins are in good state of preservation, even fine coloring, painting being in some instances well preserved. Lotus obelisk very beautiful, simply must go again. How old the world is since civilization!