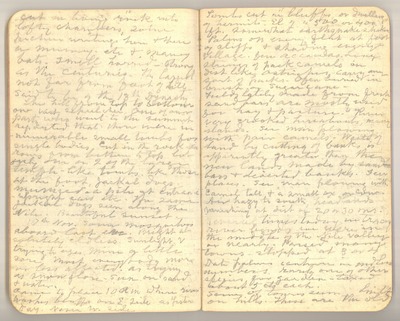 cut in living rock into lofty chambers, some picture writing, here and there a mummy, etc., and many bats. Smell horrid, strong as the centuries. The largest not far from foot of hiss, said to be of the 13th Dynasty. The hill from top to bottom one vast sepulcher. One of our party who went to the summit reported that there were innumerable small tombs for single bodies, cut in the rock in rows from bottom to top but only one or 2 of the large temple-like tombs, like those at the foot. Jackal dogs mummied, a pile at entrance, upright ears, etc. The same jackal dogs seen along the Nile. Beautiful sunset. November 10th Some mosquitos aboard last evening. Bright absolutely cloudless. Sunlight very trying to eyes. Mine a little sore, most everybody more or less affected - as trying as snow glare seen on sand and water. Came to place 10:00 A.M. where river washes bluffs on east side as yesterday. Never west side. Tombs cut in bluffs, or dwellings of hermits. Elevation of bluffs 500 or 400 feet, somewhat earthquake shaken. Palms on every flat at foot of cliffs and shading every village, few acacias. Long strings of pack camels in distance like ostriches - carry any sort of packs. Often buried in brush or sugarcane. Fields lately made from fresh sandbars are mostly used for hay and pasture. River very crooked hereabouts, many islands. See man plowing with pair camels. Waste of land by cutting of banks is apparently greater than the new lands made by sandbars and diverted banks. Few places. See man plowing with camel tall, and a small ox or cow. Air hazy to south, headlands vanishing at distance of 20 or 30 miles. Several times today in tracing river bends we were in the middle of the Nile valley or nearly. Passed many towns, stopped at 3 or 4. Date palms continue in endless numbers, rarely one of other species, for garden is taxed about 5 cents each. Some of towns seem built on hills. These are the old