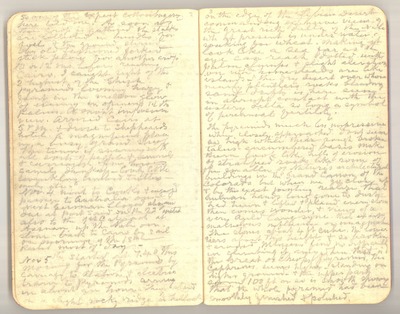 so one of the expert cotton buyers here told me. As soon as the crop is gathered the stalks are collected in bundles for fuel, and the ground stirred by old-fashioned forded stick plow for another crop. 10 or 12 miles before reaching Cairo, I caught sight of the 2 highest of the Ghizeh [Giza] pyramids, looming hazy and faint in the mellow glow of evening in opening between the palms. A most impressive view. Arrived Cairo at 5:00 P.M. and drove to Shepherds Hotel, a magnificent place in a busy grand street. The town is swarming with all sorts of people and animals and carriages, from horses, camels, donkeys - lovely little twinkling lambed trotters, mules, etc. November 4th Went to Cooks and engaged passage to Australia on next German Lloyd steamer, one at Port Said on the 22nd, instead; also to the First Cataract at Assouan, up the Nile on steamer, back to Cairo on rail on morning of the 18th. Rested most of the day. November 5th Started at 7:40 this morning for the Pyramids by carriage to station and electric train to Pyramids, arriving in about an hour. They stand on a slight rocky ridge or hillock on the edge of the Libyan Desert, commanding extensive views of the great rich delta of the Nile which at present is under water, soaking for wheat, making it look like a sea far as the eye can reach, dotted with palm clumps and slight elevations on which the homesteads are like islands. The dry desert over whose nearly plantless rocks blinding sand drifts is here seen in abrupt contact with the watery delta so long a symbol of perennial fertility. The pyramids much less impressive when closely approached. Don’t seem as high while their rough broken talus-encumbered bases make them look like hills of erosion of stratified rocks like some of the smaller of Nature’s architectural buildings in the Grand Canyon of the Colorado, but when we go close up and by this exact jointing realize that human hands long gone to dust had hewn and lifted and placed every stone, then comes wonder and views of a very auld land syne that exert marvellous influence on imagination. The stones about 4 feet cube, the lower tiers about this height, and so broken and eroded, mountaineers find no difficulty in climbing it only when that is the Great or Cheops Pyramid. The Caphrenes [Khafre] seems higher, standing on higher ground, and the upper part some 100 feet or so is smooth showing that the whole pyramid had been smoothly finished and polished.