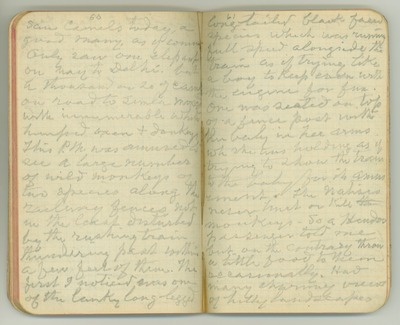 Saw camels today, a good many as if common. Only saw one elephant on way to Delhi, but a thousand or so of camels on road to Simla mixed with innumerable white humped oxen and donkeys. This P.M. was amused to see a large number of wild monkeys of two species along the railway fences, not in the least disturbed by the rushing train, thundering past within a few feet of them. The first I noticed was one of the lanky long-legged, long-tailed black faced species which was running full speed alongside the train as if trying like a boy to keep even with the engine for fun. One was seated on top of a fence post with the baby in her arms, which she was holding as if trying to show the train to the baby for its amusement. The natives never hurt or kill monkeys. So a Hindu passenger told me, but on the contrary throw a little food to them occasionally. Had many charming views of hilly landscapes,