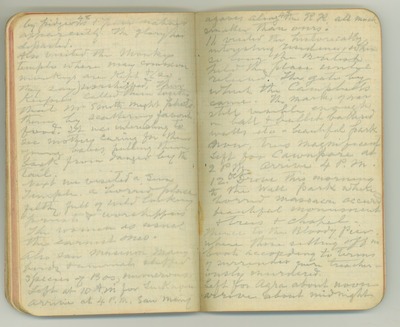 by pigeons and poor natives. Apparently the glory has departed. Also visited the Monkey temples where many common monkeys are kept and (so they say) worshipped. Their keepers called them together that Mr. Smith might photo them, by scattering favorite food. It was interesting to see mothers caring for their young babes, pulling them back from danger by the tail. Next we visited a Siva Temple, a horrid place, filthy, full of wild-looking priests and worshippers. The women as usual the earnest ones. Also saw Museum. Many birds and animals stuffed, species of Bos, numerous. Left at 10 A.M. for Lucknow. Arrive at 4:00 P.M. Saw many agaves along the railroad, all much smaller than ours. October 11th. Visited the historically interesting Residency where so long the British held the place until relieved. The gate by which the Campbells came. The mark of war still visible enough in ball and bullet battered walls, etc., a beautiful park now, trees magnificent. Left for Cawnpore at 2:00 P.M. Arrive 4:00 P.M. October 12th. Drove this morning to the Well Park where horrid massacre occurred, beautiful monument and trees and chapel. Thence to the Bloody Pier where those setting off in boats according to terms of surrender were treacherously murdered. Left for Agra about noon, arrive about midnight.