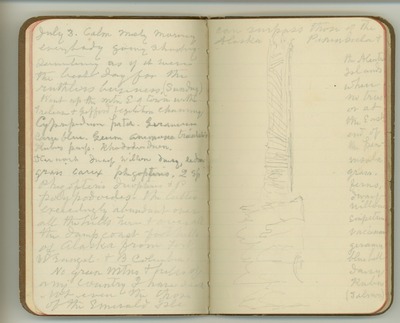 July 3 Calm misty morning; everybody going shooting, sauntering as if it were the best day for the ruthless business. (Sunday) Went up the [mountain] [East] of town with Trelean and Gifford, vegetation charming; cypopedium patch, geranium large blue, [Ge ], anemone trinitatis, rubus, purp. Rhododendron, dwarf willow, daisy, ledum, grass, carcx, phigopferis, 2 [species] Phigopteris driopteris and P polypodoides; the latter exceedingly abundant over all the hills here and over all the damp coast foothills of Alaska from Fort Wrangell to [British] Columbia. No green [mountains] and hills of any country that I have seen, not even those of the Emerald Isle can surpass those of the Alaska Peninsula and the Aleutian Islands, where no trees, or at the East end of the Peninsula, grass ferns, dwarf willow, empetrum, vaccinium, geranium, blue bell, daisy, Rubus (salmon),