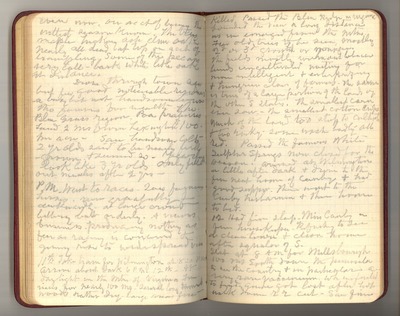 even now, on acct of being the wettest season known. The trees maple, hickory, ash, elm, oak, nearly all dead at top on acct of trampling; some of the pecans very tall, bark white like oak at distance. Drove through town, saw but few good noticeable residences tho’ famous for wealth; the Blue Grass region. Poa pratensis; land 2 ms from Lexington $100. Per acre; saw handsome colts 2 yrs old said to be nearly full grown and seemed so; yearlings look like 3 yr olds, only fill out muscles after 2 yrs. P.M. Went to the races, saw famous horses run gracefully, awkwardly; a large crowd betting but orderly; a vicious business producing nothing as far as raising is concerned and giving rise to widespread vice. [Oct 11]. Take train for Wilmington at 8:20 P.M. Arrive about dark 6 P.M. 12th. At daylight in the mtns of Virginia, fine views for nearly 100 ms, several long tunnels, woods rather dry, large areas fire killed. Passed the Blue Ridge in Virginia, bounded the view a long distance as we emerged from the mtns; few old trees to be seen, mostly 2d or 3d growth or younger; the fields mostly wornout tobacco lands uncultivated, waiting for more intelligent and enterprising and hungrier class of farmers. The same is true of a large portion of the lands of the other S states. The smallest corn ever saw, the smallest cotton crops, much of the land too steep to cultivate and too rocky, some wash badly, all red. Passed the famous White Sulphur Springs now closed for the reason. Arrived at Wilmington a little after dark, and drive to the fine neat home of Canby and had good supper, then went to the Canby herbarium and then home to bed. [Oct 12]. Had fine sleep. Miss Canby a fine housekeeper, refreshing to see a clean town and clean home after squalor of S. Start at 8 A.M. for Millsborough, 100 ms South down the peninsula to see the country and in particular a very rare Vaccinium wh we failed to find. Guide got lost after hot walk down rr cut. Saw fine