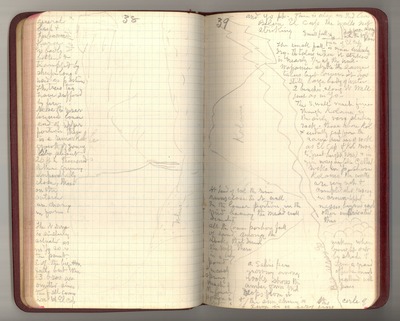 general brush and herbaceous flora is badly bitten and trampled by sheep long used as a pasture. The trees too have suffered by fire. Near the river towards lower end of upper portion there is a remarkable growth of young libo about 20 ft high, thousands of them growing unpenetrably close, those on the outside are charming in form. The N dome is similarly situated as in Yosemite so is the point E of the big fall but the 3 brothers are omitted since the fall comes in between El Capitan and Yosemite point. There is also an Indian canyon below El Capitan the walls not striking. The small fall is now entirely dry. The talus where is strikes is nearly half up the wall. Wapama strike the same talus but lower. TI has still large body of water, two benches along N wall just as in Yosemite. The S wall much finer though Kolana is the only very striking rock. Those above Kol. And evidently cut from the same hard bar of rock as El Capitan and Kol. rise to great height (3000) and in general way are like Cathedral rocks in Yosemite- above, Kolana the walls are very rich and complicated rising in crown- tipped masses beyond each other imbricated thus making when brought out by sun and shade a grand effect- most feathered with pine. At the head of valley the river runs close to N wall. In the lower portion in the mid leaving the mead well divided; All the lower portion full of sand among the rocks that divide the valley there is a lily pond and in early spring much of the lower portion is wet.