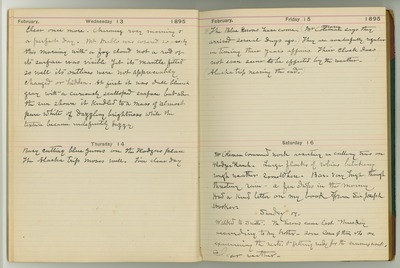 February Wednesday 13, 1895 Clear once more. Charming rosy morning & a perfect day. Mt. Diablo was covered so evenly this morning with a fog cloud not a rod of its surface was visible yet its mantle fitted so well its outlines were not appreciably changed or hidden. At first it was dull bluish gray with a curiously scalloped surface but when the sun shown it kindled to a mass of almost pure white of dazzling brightness while the texture became indefinitely fuzzy.

Friday 15 The blue herons have come. Mr. Morey Coleman says they arrived several days ago. They are wonderfully regular in timing their year’s affairs. Their clock does not even seem to be affected by the weather. Alaska trip nearing the end.

Sunday 17 Walked to Swetts’. The herons came last Thursday according to my brother, some seven of them who are examining the nests & getting ready for the summer work. Clear weather.