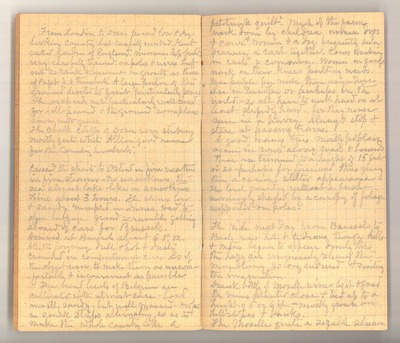 1 From London to Dover passed low & dry looking country but carefully [worked]. Kent called Garden of England. Numerous hop fields very carefully trained on poles & wires but not so rank & luxurious in growth as those of Puget S & [thereabouts]. A large portion of this ground devoted to fruit particularly pears. The orchards not particularly well cared for – ill-pruned & the ground some places [sown] with grass. The chalk cliffs of Dover very striking mostly [quite] white Albion good named for the country [hereabouts]. Crossed the straits to Ostend in fine weather in fine steamer, no sea sickness. The sea almost lake like in smoothness. Time about 3 hours. The shores low & sandy rumpled in dunes. Hard to open baggage. Grand scramble getting aboard of cars for Brussels. Arrived at Brussels about 6PM. All the journey dull & hot & dusty. Crowded in compartment cars as if the object were to make them as uncomfortable & inconvenient as possible. The broad levels of Belgium are cultivated with utmost care, land mostly sandy, but well [manicured] – crops in small strips alternating so as to make the whole country like a patchwork quilt. 2 Much of the farm work done by children, women dogs & cows. A woman & a dog frequently seen drawing a cart together. Cows working in carts v [very ] common. Women in gangs work on their knees pulling weeds. More people per mile than anywhere else in Europe or perhaps in the world, so all have to work hard or at least [stupidly] hard for they never seem in a hurry, always stop & stare at passing trains. A good many trees mostly poplars occur in rows along roads & [bounds]. These are trimmed to a height of 15 feet or 20 perhaps for firewood thus giving them a curious stilted appearance. The [level] country without a bush seemingly shaded by a canopy of foliage supported on poles. The ride next day from Brussels to Basle was hot & tedious though hills & mtns [mountains]began to appear [dimly] [thro] the hazy air [immensely] [relieving] the [monotony] so long [endured] & exciting the imagination. Drank bottle of Moselle wine, light & good. The vines planted close & tied up to a height of 5 or 6 ft., mostly grown on hillslopes & banks. The Moselle quite a sizeable stream