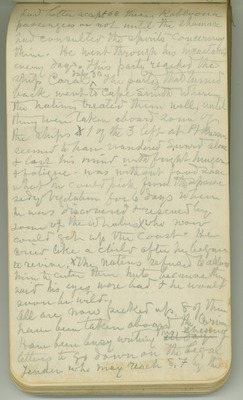 had better accept these Kabloona passengers or not, until the Shaman had consulted the spirits concerning them. He went through his incantations every day. This party reached the ship “Coral” July 30. The party that turned back went to Cape Smith, where the natives treated them well, until they were taken aboard some of the ships. One of the three left at Pt. Barrow seemed to have wandered S.ward along and lost his mind with fright, hunger, and fatigue, was without food save what he could pick from the sparse, seedy vegetation for six days, when he was discovered and rescued by some of the whalers, who now could get up the coast. He cried like a child after he began to revive. The natives refused to allow him to enter their huts, because they said his eyes were bad, and he would soon be wild. All are now picked up, eight of them have been taken aboard the Corwin. Have been busy writing this evening letters to go down on the Legal Tender which may reach S.F. by the