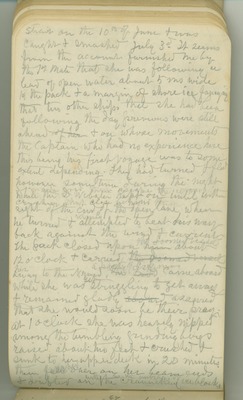 Straight on the 10th of June and was caught and smashed July 3d. It seems from the account furnished me by the 1st Master that she was following a lead of open water about 5 miles wide, parallel to the pack and a margin of shore-ice, fancying that two other ships that she had been following the day previous were still ahead, and on whose movements the Captain, who had no experience here, this being his first voyage, was to some extent depending. They had turned and fled, however, some time during the nights, and made good their escape from the ice jaws crushing shut close behind them, while the Dan Webster kept on until within sight of the end of the open lane, when he turned and vainly attempted to beat his way back against the wind and current. The pack closed upon the doomed vessel about 12 o’clock, and carried here away to the N.ward. A party of Eskimos came aboard while she was yet struggling to get away and remained gladly, assured that she would soon be their prey. At one o’clock she was heavily nipped among the tumbling grinding bergs, raised about two feet and crushed and sunk to her upper deck in 20 minutes, then fell over on her beam ends and drifted in the embrace of the crunching ice-blocks