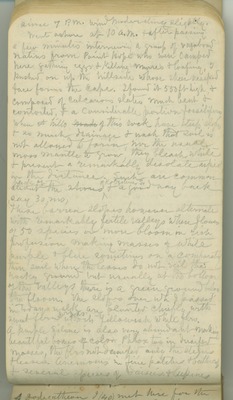 since 7 o’clock this evening. Wind moderating slightly. I went ashore at 10 A.M. and, after passing a few minutes interviewing a group of vagabond natives from Point Hope who were camped here to gather eggs, kill murres, and loaf, I pushed on up the hillside whose sheer scarped face forms the Cape. I found it 550 ft. high, composed of calcareous slates, much bent and contorted, and a considerable portion was fossiliferous. Where hills of this rock have steep slopes, and so much drainage and wash that soil is not allowed to form, nor the usual moss mantle to grow, they bleach white and present a remarkably desolate aspect in the distance. Such hills are common back of Kotzebue Sound. These barren slopes, however, alternate with remarkably fertile valleys where flowers of 50 species or more bloom in rich profusion, making masses of white, purple and blue. Sometimes this occurs on a comparatively thin soil where the leaves do not veil the rocky ground; but usually at the bottom of the valleys there is a green ground below the bloom. The slopes over which I passed in to-day’s walk are planted chiefly with sweet fern-dryas with its yellowish white flowers. A purple silene is also very abundant, making beautiful bosses of color. Phlox is present in dwarfed masses, only the stems and leaves being dwarfed, not the flowers. Anemones occur in fine patches, and buttercups, and several species of daises and lupines.