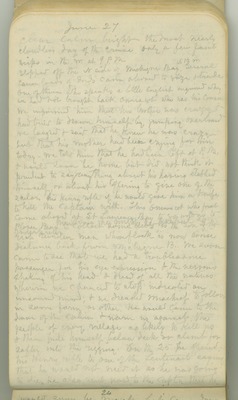 June 27. Clear, calm, bright – the most nearly cloudless day of the cruise, only a few faint wisps in the W. at 9 P.M. Stopped off the N. side of Mchigne Bay at 12 M. Several canoe loads of Indians came aboard to gaze and trade. One of them who speaks a little English enquired why we had not brought back Omniscot, who was his cousin. We informed him that his brother was crazy and had tried to drown himself by jumping overboard. He laughed and said that he knew he was crazy, but that his mother had been crying for him to-day. We told him that he had been left at P.B. and would soon be home, but did not think it prudent to say anything about his having stabbed himself, or about his offering to give one of the sailors his Henry rifle if he would give him a knife to kill the Captain with. This Omniscot, who first came aboard at St. Lawrence Bay to go with us to Plover Bay to collect some debts, is the son of the rich reindeer man whose flock is now some distance back from Michigne Bay. We soon came to see that we had a troublesome passenger, for his eye expression and the nervous shaking of his head and dread of all the natives wherever we chanced to stop indicated an unsound mind, and we dreaded mischief to follow in some form or other. HE would come to the door of the cabin and warn us against the people of very village as likely to kill us, and then hide himself below deck or climb for safety into the rigging. On the 25th he offered his Henry rifle to one of the Lieutenants, saying that he would not need it, as he was going to die. He also sent word to the Captain that he