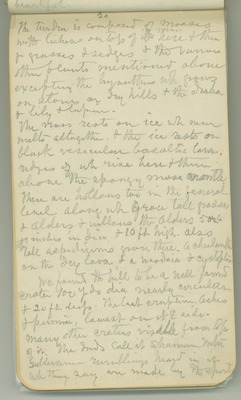 The tundra is composed of mosses with lichens on top of the most here and there, and grasses and sedges and the various other plants mentioned above, excepting the bryanthus, which grows on stones or dry hills. The most rests on ice which never melts altogether, and the ice rests on black vesicular basaltic lava, ridges of which rise here and there above the spongy mantle of moss. There are hollows, too, in the general level, along which grow tall grasses, alders, and willows. The latter 5 or 6 inches in dia. and 10 ft. high. Also, tall aspidiums grow there, a cheilanthes on the dry lava, and a woodsia and a cystopteris. We found the hill to be a well-formed crater 100 yds. in dia., nearly circular and 20 ft. deep. The last eruption, ashes and pumice, lowest on N.E. side. Many other craters visible from top of it. The Indians call it Shaman Mountain, subterranean rumblings heard in it, which, they say, are made by the spirits