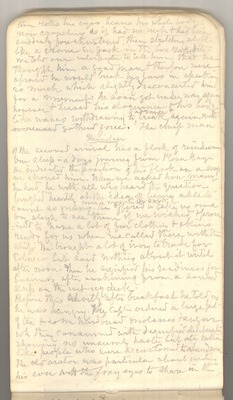 lion, rolls his eyes, heaves his whole body, now crouching as if had no neck and had been suddenly foreshortened, then stretching aloft like a crane in Jack-in-the-box rapidity. We told our interpreter to tell him that we thought him a good man, and therefore were afraid he would break his jaws in speaking so much, which slightly disconcerted him for a moment. He soon got under way again, however, and heaved his eloquence and his body like waves withdrawing to advance and break again with gathered force. The chief man of the second arrival has a flock of reindeer one sleep – a day’s journey – from Plover Bay. He indicated the position of his flock on a map we showed him. When we asked how many he had, he with all who heard the question laughed heartily at the idea of being able to count so many – “Cover a mountain,” he said. He offered to take us on a dog sleigh to see them if we wished, and promised to have a lot of fur clothing and skins ready for us when we called there with the ship. He brought a lot of ivory to trade for tobacco, but said nothing about it until afternoon. Then he signified his readiness for business after awakening from a sound sleep on the wet icy deck. Before this, shortly after breakfast, he told us he was hungry. The Capt. Ordered a large pot of tea and hard bread, molasses, and sugar, which they consumed with dignified deliberation, showing no unseemly haste, but ate rather like people who were accustomed to abundance. The old orator was particular about inviting his son with the foxy eyes to share in the