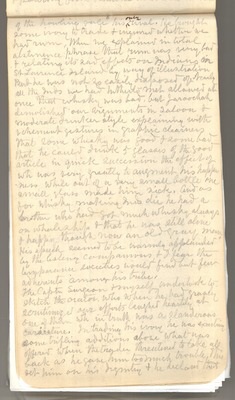 of the howling gale, his only rival. He brought some ivory to trade and inquired whether we had rum, when we explained in total abstinence phrase that rum was very bad and related its sad effects on Indians on St. Lawrence Island by way of illustration. But he was not so easily disposed of. Nearly all the Indians we had hitherto met allowed at once that whisky was bad, but Jaroochah demolished our arguments in graphic clearness that some whisky was good and some bad, that he could drink 5 glasses of the good article in quick succession, the effect of which was very greatly to augment his happiness, while out of very small bottle one small glass made him sick. And as far whisky making Indians die, he had a brother who had got much whisky always on whale ships, and he was still alive and happy, though now an old gray man. His speech seemed to be warmly applauded by the listening companions, and I fear the temperance societies would find but few adherents among his tribe. The Captain, Surgeon, and myself undertook to sketch the orator, who when he had gravely scrutinized our efforts laughed heartily at one of them, which in truth was a slanderous caricature. In trading his ivory, he was exacting some trifling additions above what was offered when the trader threatened to take all back as he gave him too much trouble. This set him on his dignity and he declared that